In August 1974 the Maine Historical Preservation Commission informed Mount Hope Superintendent Harold S. Burrill, Jr., that the Commission was considering the cemetery for nomination to the National Register of Historic Places. Inclusion on the Register, according to Commission documents, would not affect the autonomy of the Corporation but would rather simply recognize the cemetery, as was true for any corresponding, so designated, “building, structure, or site” as being “an important historic resource that should be preserved as an integral part of Maine’s heritage and environment.” It would protect the cemetery from any “detrimental impact that might occur” as the result of municipal, state, or federal agency projects using federal funds. 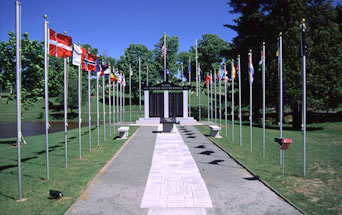 The Commission reviewed Mount Hope’s case, forwarded its recommendation to the National Park Service as required for approval, then added Mount Hope’s name to the Register in December 1974. The cemetery’s resulting certificate as signed by Maine Liaison Officer James M. Mundy identified Mount Hope as “a part of the historical and cultural heritage of our nation” which “should be preserved as a living part of our community life and development in order to give a sense of orientation to the American people.