The rural cemetery movement in the United States began in 1831, with the opening of Mount Auburn Cemetery in Cambridge, Mass. Before this movement occurred, urban cemeteries had been in the midst of towns and cities and were often crowded and virtually grassless. With increasing urbanization, city dwellers began to be concerned about the need for natural beauty. A romantic type landscape was sought as a counterbalance to the disturbing aspects of the city landscape. 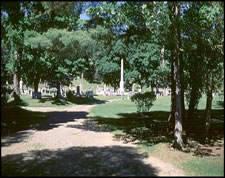 At Mount Auburn, a large tract of land was converted into a romantic park with ponds, bowers, grottos, and a great variety of planting. It was consciously designed for the living as well as the dead.

The City of Bangor was not long in following suit. Bangor became very much alive with the settlement of the Penobscot River Valley in the years preceding the Revolutionary War. In 1834, Bangor was declared a city. Among the citizens of Bangor came a strong sentiment for the creation of a new cemetery grounds for the burial of its dead.

The general dissatisfaction existing among the citizens of Bangor with respect to this subject made for a heated discussion. They were dissatisfied with the old small crowded cemeteries and this led to the successful establishment of Mount Hope Cemetery in 1836. Since that time, over thirty thousand individuals have found a final resting place here.

Mount Hope Cemetery embraces two distinct organizations and premises. One is a territory belonging to the City and devoted to the use of the City or the public generally; the other is limited to that of members of the Cemetery corporation. However, the two are so intimately connected, their relationship and respective history may be regarded as one.
The cemetery grounds are located on the north bank of Penobscot River, about two miles northeast of the Kenduskeag Stream and includes roughly 300 acres of land.

There were several burial lots in Bangor before the establishment of Mount Hope. The first burial lot existed on Thomas Hill near the present junction of Highland Avenue and Highland Avenue or present day Thomas Hill Road. It was soon abandoned and two other burial lots were established, one on the east side of the Kenduskeag Stream and the other where the present YMCA building is located on the corner of Hammond and Court Streets.

In reference to the lot where the YMCA building now stands, few are aware of the fact that in 1840 when work was being done to complete an extension on Court Street to Hammond Street, as it now exists, it became necessary to level out the hill that was in the way. After construction began, human remains were occasionally dug up. When the public became aware of a coffin protruding from the ground, actions were taken to properly inter the rest of the remains.

In 1834, the Bangor Horticultural Society was formed to purchase half of Joseph Treat’s 100 acre lot on the outskirts of the city. To design a layout, following the styles of Mount Auburn, Charles G. Bryant, a well noted local architect was hired. Bryant, during his career, left probably a stronger mark on Bangor’s architectural tone than any other man. His plan for Mount Hope divided the land into two areas, one for burials and the other for horticultural purposes.

The Horticultural Society, not having lived up to its responsibilities, was superseded in September 1834 by the Mount Hope Cemetery Corporation which laid out the cemetery according to Bryant’s plan. On July 21, 1836, at the consecration ceremonies, The Honorable Edward Kent, Mayor of Bangor and later Governor of Maine, well expressed the philosophy which engendered the rural cemetery movement when he proclaimed: “A spot situated like this, with the beauties of nature scattered on every hand, is calculated to give a chastened and holy calm to the mind and to lead the thought to study nature in her works and to God as her great author.”

Mount Hope Cemetery ranks among the earliest of American garden cemeteries. It followed Mount Auburn by only three years but its larger importance lies in its reflection of a new mood across America, a disenchantment with the urban centers and a desire to provide a romanticized rural atmosphere within the reach of the city dweller. This was also typified by the creation of Central Park in New York City years later.